Notes from a seminar I gave RMIT postgrad publishing students on 10 April 2014.

–  2011, Tom Gilliatt (then non-fiction publisher at Pan Mac) and Joel Naoum (then editor) started thinking about an experimental, digital-only imprint run as a start-up

– We did everything that a traditional publisher is wary of doing (because of various reasons – trying not to offend stakeholders, protecting IP)

– Mixture of new and backlist titles, from a variety of sources – literary agents, slush pile, Pan Macmillan out of print titles, even a book commissioned on the strength of a popular blog (How to Write Badly Well).

While we had the contacts allowed by traditional publishing, we had nowhere near the budget. What little budget we did have went mostly to production costs (mostly editing – we used the same freelance editors as Pan Macmillan does).

– Sourcing content (building a reputation so that people would submit manuscripts)

– Focus on  what readers want, rather than what we as publishers think they should want

– Community-building – immense amount of goodwill in the Australian online book world, because they saw we were trying to do something new and different, and fairer for readers and authors (blog, podcast)

Three main sections – the two biggest concerns of digital book publishers, Metadata and Readers – two equally important, diametrically opposite sides of the book world. Finally, Vertical Markets, which has been the popular buzzword in publishing since everyone got tired of ‘Discoverability’. 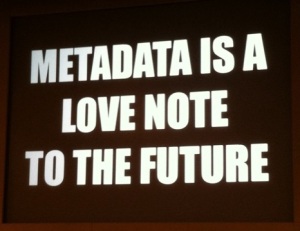 – Metadata used to be entered by someone at the warehouse looking at a physical copy of the book, and then the information was distributed as an ONIX file separately from the book

–  Now with epub3, the metadata can be embedded within the ebook file, distributed along with the product and then extracted by the retailer

– Offline book retailers help readers make choices by having piles of books in front of your eyes, and having booksellers who can make suggestions

– Online retailers use customer data (what you’ve bought, viewed or listed) to do the same thing

–  Amazon’s is the most advanced recommendation algorithm, and is agnostic – the priority is to show you the book you are most likely to buy

– Aggregates data about your browsing, purchasing, and reading habits, and then extrapolates about what you would like to read next based on all the other customers with similar histories

– ‘Also boughts’, personalised emails (will often receive emails from Amazon about books that I viewed recently but not purchased)

– With the recommendation algorithm in mind, we used to do a lot of giveaways, or listing the book as free through retailers for a limited time – so people would download it and then it would show up in other user’s feeds 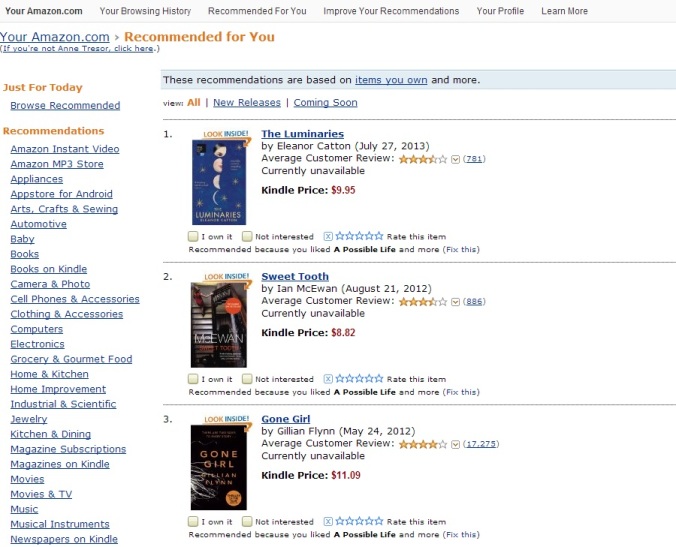 –    Data-driven publishing seems like such a new concept given the advent of digital information gathering and “big data”, but not new

– Bigger opportunity than sales data is the ability to talk directly to readers, and more importantly to listen to them – something that publishers have never really done before

– Booksellers have always been the mediators between publishers and readers, but the gates are down (thanks internet!)

– Traditional media review coverage, author interviews and mentions still sell books, but there are far fewer opportunities for this

– Online reviews on blogs, social reading sites and social media are becoming more and more important to the success of a book or author

– Mostly about engagement and listening, not just broadcasting 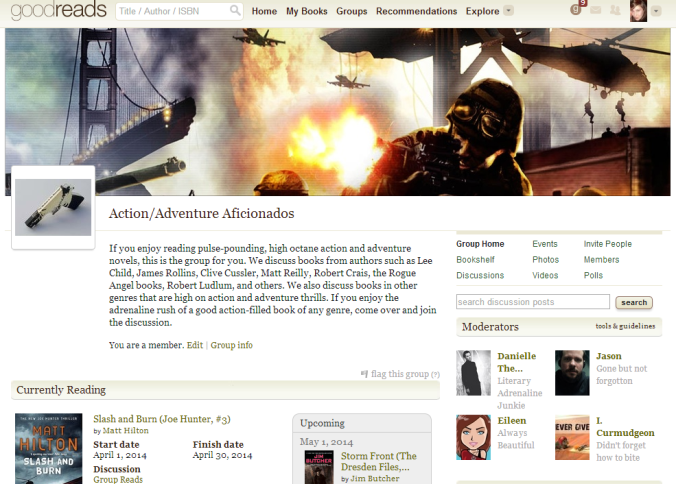 Communities of interest around genres, and subgenres

Romance – biggest and most enagaged community of readers online

Finding and publishing into already-established communities of interest

Book marketing campaigns used to be incredibly similar no matter what type of book – pay for co-op with DDS and chains, print hundreds of posters and bookmarks for bookstores, do airport lightwall ads for the big books, Women’s Weekly full-page for Di Morrissey (still happens), shopping centre ads for Matt Reilly and Bryce Courtenay

–  Digital marketing is far more nuanced – again, not about broadcasting but about starting a conversation

–  You can’t reach sci-fi readers the same way you do romance readers, they don’t have the same behaviour online

– What type of book did best, which genre, how engaged was the author in the promotional process, did you get a spike in sales from any particular coverage or review

From the slush pile to the bestseller list: how zombies and rock stars got me a four-book publishing deal

– Kylie first heard about Momentum through Louise Cusack, who had been in a romance writers’ group with her (offline communities of interest)

– Initially attracted to Momentum because of personable social media (twitter)

– Submitted, offered a traditional Momentum deal (40% net for 12 months) and Flesh and Skin were published to medium success

– Kylie’s involvement in romance reading communities online led her to see that Rockstar Romance was growing in popularity, and that New Adult fiction was huge – so her next book was written with that readership in mind

– Published in June 2013, it was an immediate success due to several very influential bloggers with big followings giving her favourable reviews and gushing about Lick all over social media

– By October 2013 Kylie had been offered a worldwide print deal by Macmillan, after a bidding war that involved several of the big 6 publishers worldwide 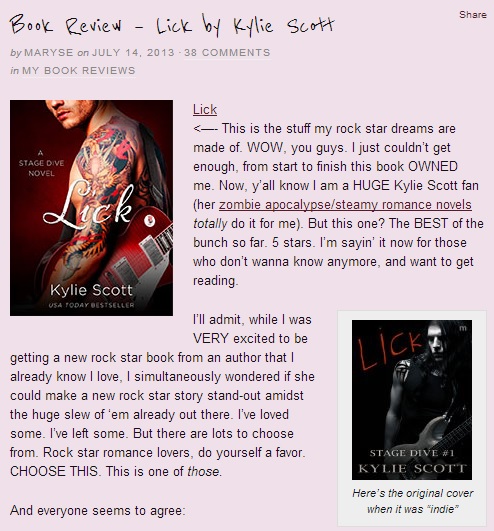 These are my tweets